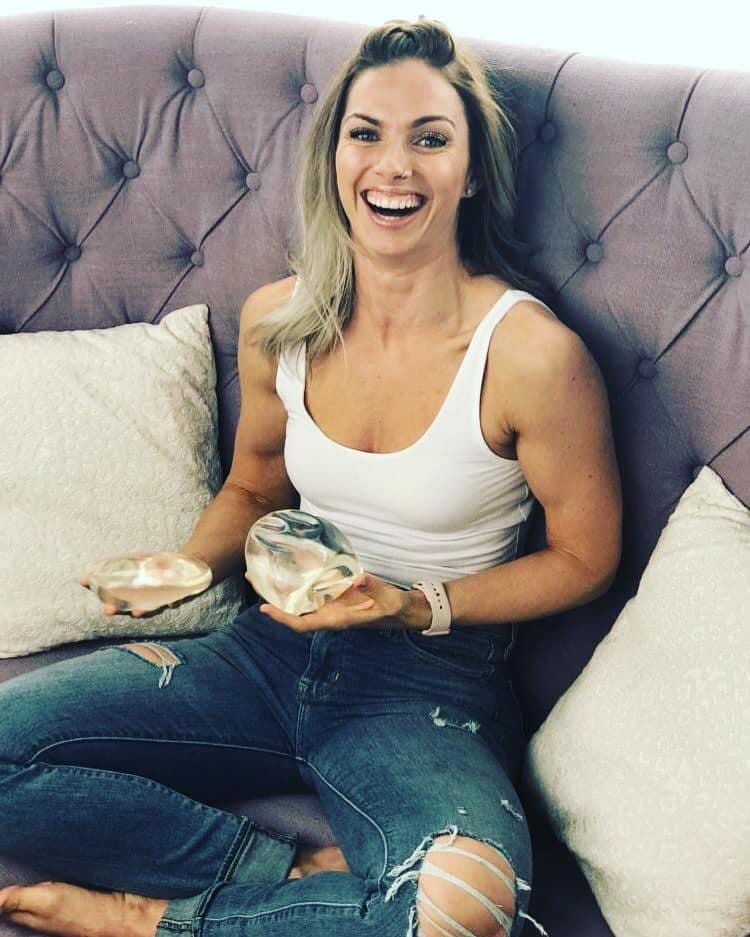 Today I am 2.5 Years free of breast implants illness.

It truly does feel like God gave me a second chance at life.

One thing I have learned is you only get one life and you can’t live it if you’re sick.

Your health is one thing you can’t replace.

I got so caught up in what I thought the ideal was that I lost who I was for a while both internally and externally.

A little bit about my story:

I was so tired all the time, which made the depression worse.

I didn’t link to my implants because the surgeon tells you there safe even if they ruptured you wouldn’t get sick.

That there are is no proven evidence to back it up.

He said the gummy bear are the safest as if it does rupture it can’t leak.

So I thought they were safe, so my symptoms must be something else. About 6 months after I noticed my implant on my right side had seemed to drop and it did, so I had to go in for another surgery.

After my surgery I started to feel worse, I thought it was just from having surgery so I thought it would pass but my symptoms slowly increased.

Again I thought it was all in my head or maybe I was starting to become a hypochondriac so I didn’t talk about it. Depression started to get worse, to the point I went to the doctors and got put on antidepressants.

Christmas of 2017 I crashed, I stayed in my room the whole Christmas break and was so exhausted I didn’t even want to talk to my kids or my husband.

My lower pelvic region was swollen and sore, I was getting ulcers and acid reflux I couldn’t even workout anymore.

If I did workout I would get extremely exhausted, not to mention I kept injuring my calve and it would not heal. I couldn’t seem to progress in my fitness it was like I kept getting weaker no matter what I did.

I got extremely depressed and knew something was wrong, so I made a doctor appointment.

So the doctor sent me for blood work and ultrasounds to check my pelvic region for fibroids in my uterus and a breath test for my ulcers.

My liver enzymes were way higher than normal, my T3 and T4 thyroids went, so now I had to go on meds for that.

she was worried about my liver because of the numbers increased and I was showing symptoms of autoimmune.

She sent me for blood work 4 weeks later to see if anything had changed, but it had only gotten worse. We then had to increase thyroid meds and my liver enzymes were even higher and my breath test came back positive for H- pylori.

I was so stressed and wondering why I could be living a healthy lifestyle and only be 32 but feel like I was 90 on my death bed.

I was lying in bed one night and thinking on all the things I’ve done that could have caused this. The only thing that came to my mind was what if my implants are making me sick?

Could even make me sick? The surgeon said they were safe?

So I decided to google breast implants toxicity and all my symptoms were on there. I started to think ok maybe I’m going overboard. So then I thought I’ll watch some YouTube videos to see if other women have had this and then I won’t sound crazy and sure enough thousand of women with similar symptoms and even worse.

So I printed everything off and made a doctor appointment. I went in for blood work again and again not good news so I started to tell her what I thought it might be, with all my back up information 😉. Sure enough the test they would do on a person to see, my doctor already had done on me unaware that of the link between my implants and everything going off in my body.

She agreed with me and told me to make an appointment with my surgeon.

So I made my appointment and told him I wanted them out, I said my doctor had all the blood work to prove something is going on and he said ok( also tried to talk me out of it and told me I may get even more depressed without them)

He then said it’s a quick procedure with a local anesthetic and they removed the implants.

By this time I had made a video for YouTube sharing what I was going through and a girl reached out to me and told me to join the FB group called breast implant illness healing by Nicole.

In this group of 40,000 women, I had so much support and also learned that I needed to request have a full capsule removal. And why that was important.

I later learned that surgeons don’t like to do this because it’s high risk, and again my surgeon tried to talk me out of it.

I said no this is what I want and 2 months later June 1, 2018, had my breast implants removed.

That night I developed a hematoma ( breast filled with so much blood that it looked like I had had implant out). The secretary had written the surgeons number wrong so I couldn’t reach him.

The nurse calls the next morning to check up on you anyways and I told her what was wrong sent a pick and she said the Dr./surgeon would like to get you into the hospital for an emergency surgery ASAP.

Back I went for another one this time I stayed at the hospital and went home later the next day.

This has been a healing process for sure more mentally than physically.

A lesson for sure!  I know full well when God brings you through something its for others more than ourselves, helping others before they make that choice, or if they’re in the same situation.

There are many women with many stories, some like me, and some that didn’t get a second chance to tell their story.

I am a BII overcomer by the grace of God.

I want to finish with some symptoms I’ve seen in people and the one thing they had in common is their implants.

There are many more and each person is different but the one thing in common is breast implants.

The symptoms over time will just keep increasing, it doesn’t get better until their removed.

If you have symptoms of breast implant illness and you’re on medication for all these symptoms above, I want to ask you if it would be worth removing your implants if you got to come off your some meds and or feel like you have your life back again?

When you have something in your body that is making you sick, it creates inflammation in your body and inflation is a bedding ground for cancer to grow.

To me, it’s just not worth it to give up my health for appearance. I say this all with love and you know who you are if you are reading this and it’s confirming everything you’ve been going through.

Can I encourage you to go and see your doctor and put your health first?

Hannah Dawson is a certified personal trainer, nutrition and mindset coach. She is also a writer, author, bodybuilding competitor. Hannah’s passion is helping women change their stories and build healthy relationships with themselves and their bodies.